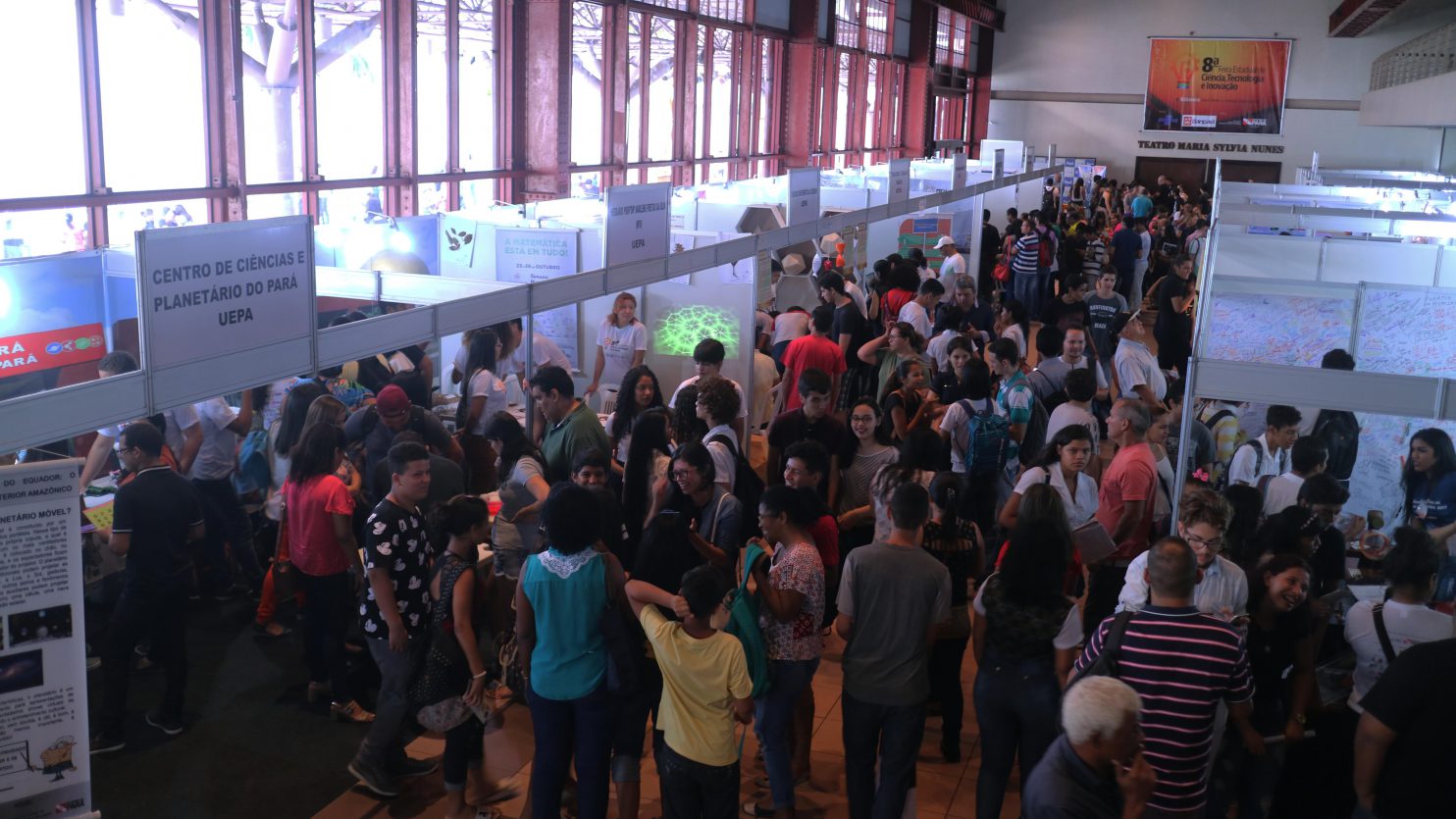 New worlds, new looks, new experiences, and a lot of fun, was what the 8th State Fair of Science, Technology and Innovation (ST&I) provided to the more than 15 thousand visitors who were at the Docks Station in Belém between the days 24 and 26 of October. The Fair is part of the National Science and Technology Week, whose theme was “Mathematics is in everything”.

The objective of the Fair was also to promote the popularization of science and technology education in the State and show how the Triad Science, Technology and Innovation is present in everyday life. The state event is an accomplishment of the Government of Pará, through the Secretariat of Science, Technology and Professional and Technological Education (Sectet) and, this year, was sponsored by the Bank of the State of Pará (Banpará) and the Brazilian Service of Support to Micro and Small Enterprises (Sebrae).

During three days, 34 universities, companies, institutions and public agencies were distributed in 26 stands, presenting their projects and activities related to the area of ST & I. With a very diversified program, the State Fair of Science, Technology and Innovation attracted people of all ages, from students of basic education to high school, undergraduate and graduate students, as well as researchers and teachers. The Fair was also an entertainment space for the whole family. The program also featured a roundtable, six workshops and 11 lectures, as well as theatrical and musical attractions, and two “Big Classes” from Pro Paz Enem.

Highlights – At the official opening of the event, a lecture was given by Brazilian astronaut Marcos Pontes, who for an hour and a half encouraged children and adults never to give up their goals. He told some curiosities about preparing to be an astronaut and life outside Earth. In the end, Marcos Pontes gave the public words of encouragement, and took photos with visitors.

Another highlight of the first day was the roundtable on “The science and technology policy in Pará and the challenges of innovation as a driver of sustainable development”, with the presence of Sectet’s CEO, Alex Fiúza de Mello; of the Rector Rubens Cardoso, of the University of the State of Pará (Uepa); of Eliana Zacca, representative of the Federation of Agriculture and Livestock of Pará (Faepa), and Joner Oliveira, of the Federation of Industries of the State of Pará (Fiepa), mediated by Eduardo Costa, president of the Amazonia Foundation for Studies and Research ( Fapespa). Another attraction applauded by the visitors, on the second and third day of the event, was the performance of the show “Cabanos”, by the theater group “Encenação”.

Mission accomplished – For the Sectet deputy secretary, Maria Amélia Enríquez, the result of the Fair was extremely positive. “The assessment we make is that the mission was accomplished. We noticed how the Fair was engaging, with the people in the booths, making questions and talking. This year, we beat the public record. Who knows from here will not leave an important scientist, a Nobel Prize, someone who will be important in the area of science, health, engineering. This is the role of the Fair, to spread and inspire the entrepreneurial and innovative spirit in the area of ST & I”, concluded the secretary.

Maria Amélia Enríquez also highlighted the work of the team that organized the Fair and the exhibitors, which she described as “anonymous heroes” in favor of science. “Projects like these can prevent school dropouts, rescue young people from crime and drugs. Talent exists and needs to be nurtured, and science is the best way to nurture that talent”, she emphasized.

Professor Hildete Correa, who takes her students every year from the municipality of Santarém Novo, a municipality in the north-east of Para, to the Science and Technology Fair, said that this is a great opportunity to make visitors to the exhibitions become multipliers of knowledge. “This is a very big learning curve. The students were delighted! We believe that they leave with a new look in the area of science and scientific knowledge, which facilitates our work and learning, because they go with new experiences”, said the teacher.

Service: Photos and videos of the 8th Science, Technology and Innovation State Fair are available at the Sectet fanpage at www.facebook.com/sectetpa/.