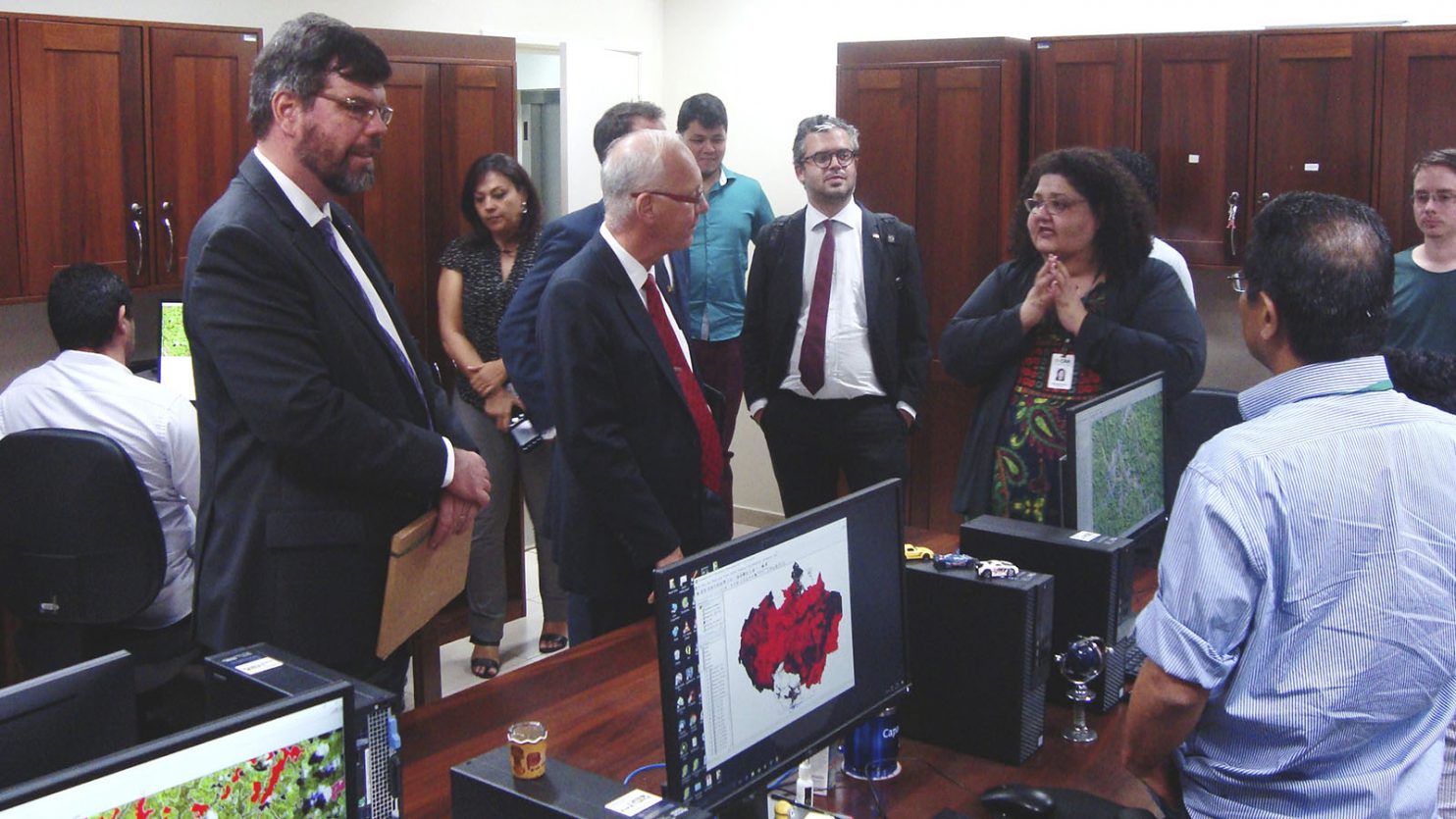 The Regional Center for the Amazon (CRA) of the National Institute of Space Research (INPE) in Belém received on Tuesday, the 18th, the visit of the German Ambassador to Brazil, Georg Witschel. On the occasion, the German representative was received by the head of the Center, Alessandra Rodrigues Gomes.

While in the capital, Witschel seeks to strengthen relations between Pará and Germany and to start building partnerships and cooperation in the areas of science, technology and knowledge to encourage investment attraction, stimulate exports and imports, strengthen trade partnerships With the state and encourage political, economic and cultural integration, in addition to commercial partnerships to promote local development.

Georg Witschel assumed the current position in September 2016. In Belém, the objective is to better understand the State, aiming not only to strengthen commercial partnerships, but also to promote political, economic and cultural integration, promoting local development, policies of protection and sustainable use of Amazonian forests, combating deforestation and reducing greenhouse gases to cope with climate change.

A country committed to the goals of the United Nations Framework Convention on Climate Change, Germany supports the efforts of the Brazilian government in the context of Cooperation for Sustainable Development. In the Amazon, Atlantic Forest and Cerrado biomes, Germany contributes to the implementation of international commitments through the promotion of the protection and sustainable use of tropical forests. The cooperation provides advice on the sustainable management of protected areas and indigenous lands that act as “green barriers against deforestation”.

“The German cooperation with Brazil has already provided consultants and instructors to INPE and, today, knowing the Regional Center of the Amazon, in view of the relevance of its productions and advancement in geotechnologies for the satellite monitoring of tropical forests, has been part of the Interest and agenda of international representatives who are passing through Pará, or, in some cases, occurring exclusively for this purpose, “said the head of CRA / INPE, Alessandra Gomes.

The creation of efficient technologies to combat the deforestation of the Amazon – and of the tropical forests as a whole is one of the missions of the CRA / INPE. At the Guamá Science and Technology Park in Belém, the Institute’s facilities have an innovative infrastructure to meet current and future demands in geotechnology.

Georg Witschel met the Capacity Building Project on Forest Satellite Monitoring (Capacitree), an initiative of INPE, which generates didactic material and trains technicians through on-site and online courses, so that they become able to operate monitoring methodologies and thus Capable of reproducing the Brazilian monitoring system in their countries. Brazil is the only country in the world to have a consolidated system.

The Ambassador then visited the TerraClass Project room, which uses remote sensing and geoprocessing techniques to qualify deforestation throughout the Legal Amazon, through satellite imagery of the PRODES system, and has already generated data on land use in the region For the years 2004, 2008, 2010, 2012 and 2014. The information obtained by TerraClass corresponds to an advance in the knowledge of the use and land cover in the Amazon. The work is done through a partnership between CRA / INPE and the Brazilian Agricultural Research Corporation (Embrapa) – Amazônia Oriental (PA) and Agricultural and Livestock Informatics (SP) units.

The German Ambassador to Brazil is accompanied by Consul Paul Steffen, the representative of the Brazil-Germany Chamber of Commerce and Industry, Thomas Timm and the director of Germany Trade and Invest, Edwin Schuh.